Cycle path no. 1 - BY FERRY TO GOAT HILL

Horní Planá – In this town with well-preserved historic architecture from the 19th century, we can also find an open-air movie theatre running in all weather conditions, a public sandy beach with minigolf, sports equipment rental store and an information centre.

Schwarzenberg Canal - Unique water structure – protected technical monument built according to the project of Ing. J. Rosenauer in the 18th and 19th centuries – connected the drainage areas of the Vltava and Danube and was used for regular rafting of wooden logs from the Bohemian Forest to Austria until 1932.

Zadní Zvonková – Originally a lumber settlement founded around 1670 with a church from the 18th century, later with an advanced glassmaking industry, and a population of 1,352 German-speaking people who as late as 1939, were forcibly displaced after World War II. In 1953, the village was rased to the ground and border barriers were placed barely a hundred metres from the church, which is now being restored by volunteers together with its adjacent cemetery.

Goat Hill – In the area within Goat Hill, Zvonková Hill and Pestřice Hill, there are protected bogged springs of several brooks with natural development.

Kyselov  – Former settlement, the remnants of which now consist only of an interesting chapel standing on rock to the left past the crossing.

Ferry Kyselov – Dolní Vltavice – Operating from June to September. However, it is necessary to book in advance and to count on waiting for other passengers, since the ferry rate (at least CZK 700) is distributed among all of them.

Černá v Pošumaví  - This resort with a history of graphite mining and beer brewing located in the centre of the Lipno Region offers a variety of services to all visitors, including an open-air movie theatre.

Cycle path no. 2 - TRIP TO THE SHOWCASE OF SOUTH BOHEMIA

Černá v Pošumaví
– This resort with a history of graphite mining and beer brewing offers a variety of services, including an open-air movie theatre.

Muckov limestone quarries – This protected area by the road to Muckov consists of three crystalline lime (marble) pits. The lime was mined there in the first quarter of the 20th century. The abandoned premises form imposing and exceptionally impressive sceneries.

Pasovary– This stately ruin of a fortress from the 13th century stands about 600 m east of the Pasovary crossroad.

Slavkov – In this village, we can find a two-storey tower fortress, whose chapel, reconstructed as a presbytery, has a preserved ribbed vault with a five-leaved rose symbol.

Kájov– Village at the foothills of the Blanský Forest with a significant set of Late Gothic clerical structures.

Dobrkovice – Available mining premises of a graphite quarry, the visit to the underground drift also includes a ride on the mine train.

Český Krumlov – Beautiful town and a UNESCO world heritage site, with a castle and a chateau from the 13th century with a unique Baroque theatre and a terraced garden. The core of the town consists of the town square and adjacent streets with Gothic, Renaissance and Baroque houses. Wax Museum, Museum of Torture, House of Photography, etc. We can visit a covered swimming pool, open-air pool or tennis courts.

Boletice – East of the village, which became the centre of an extensive military training camp, there is a ruin named Raziberg, and in the vicinity, there are Slavic cairns – the evidence of the oldest Slavic settlement.

Mokrá – The remnants of mining works near the village are now the most preserved mining sites from the famous South-Bohemian graphite mining times. The most precious object is the opening of the Joseph’s Drift near the bank of the Lipno Reservoir west of Mokrá. The mines are commemorated by a strip of old piles with drift hollows, which is still clearly recognisable, running to the southeast of Mokrá. The preserved building of the Anežka Mine with a drift was reconstructed as a recreational cottage. The Ferdinand Drift is well preserved as well, with casing and remnants of iron ladders and grate decks.

Cycle path no. 3 - TO THE RUINS OF VÍTEK’S CASTLE

Frymburk – Picturesque town founded before 1270 in the place of an abandoned castle by a commercial road from Austria. It offers all the services provided by a proper resort.

Ferry Frymburk – Frýdava – Used to transport anything up to 5 tons of weight from April to November (in April, October and November with restrictions on weekends).

Multerberg Bog  – Protected area with scrub stands, almost untouched by human activities. The thickness of the bog reaches up to three metres.

Rychnůvek – Abandoned village, once the most populous and biggest village in the region below Vítek’s Stone. Memorial commemorating the shooting of a police officer in September 1938. The original Gothic church was blown up in 1956 and the last remnants of buildings were demolished as well. The settlements of Multerberg, Pasečná, Jasánky and Otov suffered the same fate.

Schwarzenberg Canal  – Unique water structure – protected technical monument built according to the project of Ing. J. Rosenauer in the 18th and 19th centuries – connected the drainage areas of the Vltava and Danube, being 45 km long and 89.7 km together with skids and the regulated part of the Světlá brook.

Svatý Tomáš – Mountain village under the top of Vítek’s Stone, church of the same name from the 14th century, restored in 1997 after being devastated during the Communist era.

Vítek’s Stone  – The highest point of the Vítek’s Stone Uplands (1,035 m above sea level) with the stately ruins of Vítek’s Castle from the second half of the 13th century (castle with the highest elevation in the country). After reconstruction in 2005, it is used only as an observation tower.

Lipno nad Vltavou – Village and resort at the dike of the Lipno Reservoir focusing on recreation and sports. Waterpark operating year-round.

Lipno II Reservoir – Equalising reservoir on the Vltava at Vyšší Brod with a hydroelectric power plant.

Vyšší Brod – Starting point of water tourists on the Vltava with a boat rental store.

Rožmberk nad Vltavou – Picturesque town at a distinct meander on the left bank of the Vltava with an overlooking castle built before 1250 by the Rožmberks, which is, aside from regular tours, the place of night tours conducted by the White Lady. In the Museum of Torture, we can experience how the medieval instruments of “justice” worked.

Zátoň – Village recorded as early as 1137, a small Benedictine monastery was built there before 1310. The rectangular asymmetric sacristy is probably the residue of an original Romanesque sanctuary. Only a former parsonage has been preserved to this day, housing a hotel of the same name.

Běleň u Malšína – Former settlement where people come to see the rocky home of a devil who liked to harass people in the local mill.

Malšín – The yellow tourist route will lead us to a rocky bluff with the Chapel of Our Lady from 1856, from where we can see distant Luč, Kaliště and Austrian Sternstein with an observation tower.

Cycle path no. 5 - THROUGH VLTAVA MEAD TO THE RAILWAY MUSEUM

Nová Pec – Resort in the western part of the Lipno Reservoir.

Ovesná – Starting point of the Bear Trail running around interesting rocky formations to the Perník peak (1,049 m above sea level) and further to Deer Lake and around the memorial commemorating the shooting of the last bear all the way to the Černý Kříž railway station.

Vltava Mead  – Wide wold of the meandering Vltava with many bogs, a unique complex of wetlands and valley raised bogs, dead river shoulders with precious plant and animal communities.

Stožec – Recreational village in the valley of Cold Vltava. Nearby is the Stožec Mountain (1,065 m above sea level) with the protected area of Stožec Rock with a natural forest. Remnants of a guard castle at a nearby chapel, long view from the cross at the top of the rocky outlier.

České Žleby – Mountain village that used to be more important than nearby Stožec, with the sad fate of a displaced village. Only a chapel with shingle roof in the wall of the local cemetery and a stone fountain in the centre of the settlement have been preserved. Information centre of the Šumava NP and PLA.

Golden Salt Trail – Nature trail running through České Žleby and the Mlaka crossing, which commemorates the famous era of a mercantile road leading from Passau to Prachatice – commemorative stone at a spring.

Rosenauer Reservoir  – A few hundred metres above the stone commemorating the ingenious architect of the Schwarzenberg Canal is a former reservoir which contained water for wood rafting and which was probably the start of the canal.

Schwarzenberg Canal – Protected technical monument – during the course of its operation, 8 million m³ of wood was rafted there and the costs of the canal’s construction were realised as early as two years after its opening. A signed bike trail runs along almost the whole length of the canal. 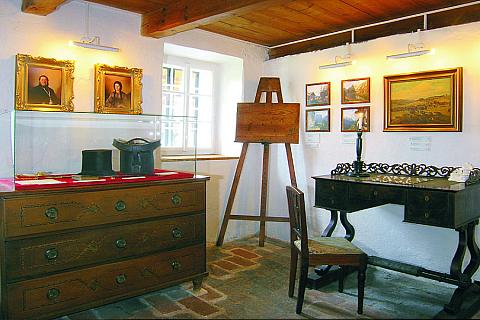 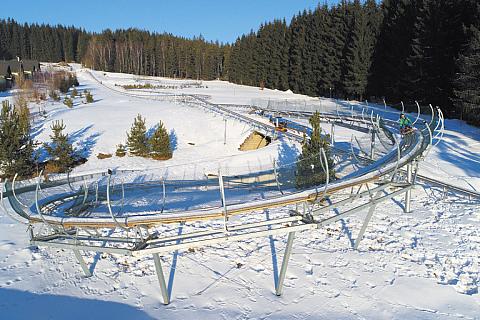 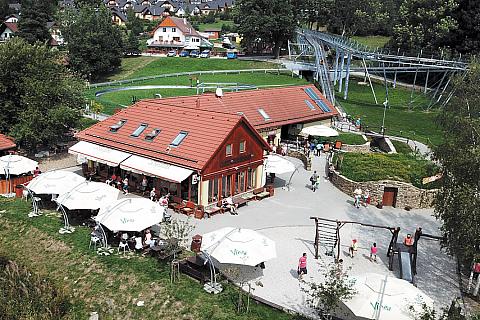 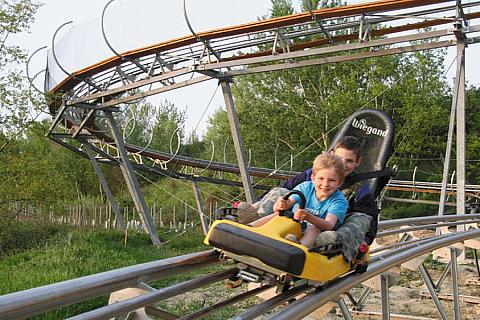 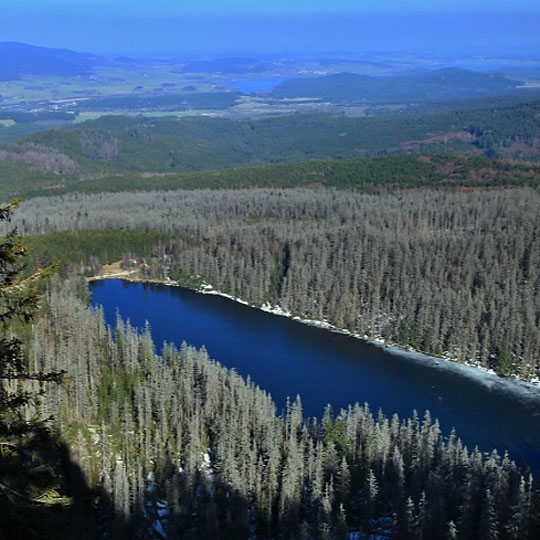 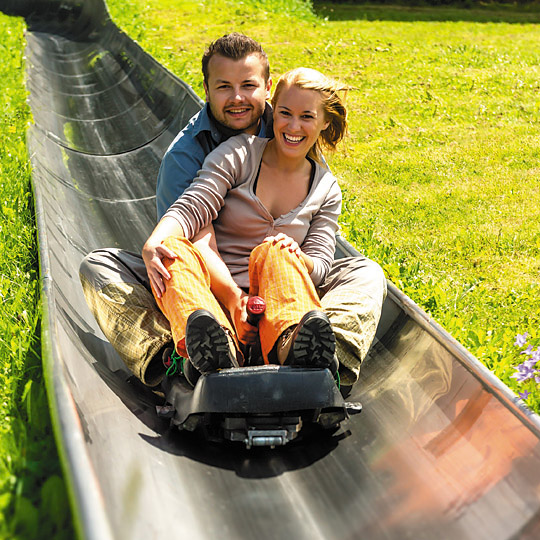 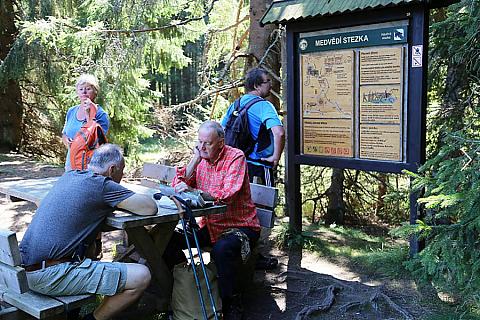 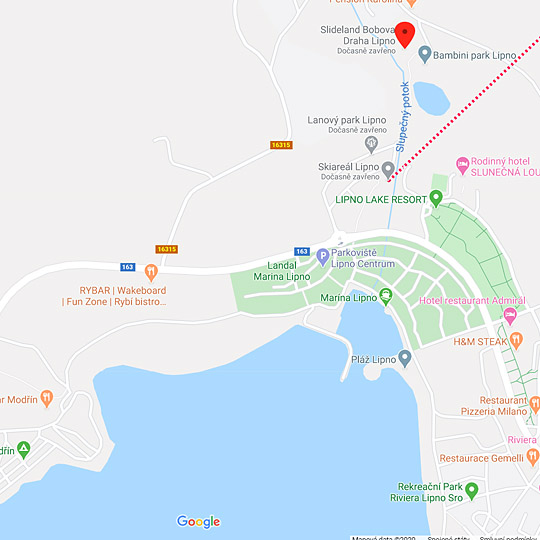 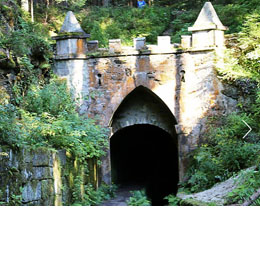 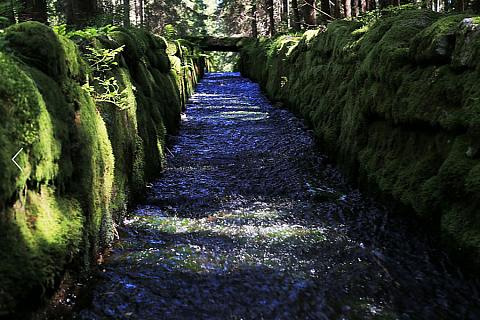